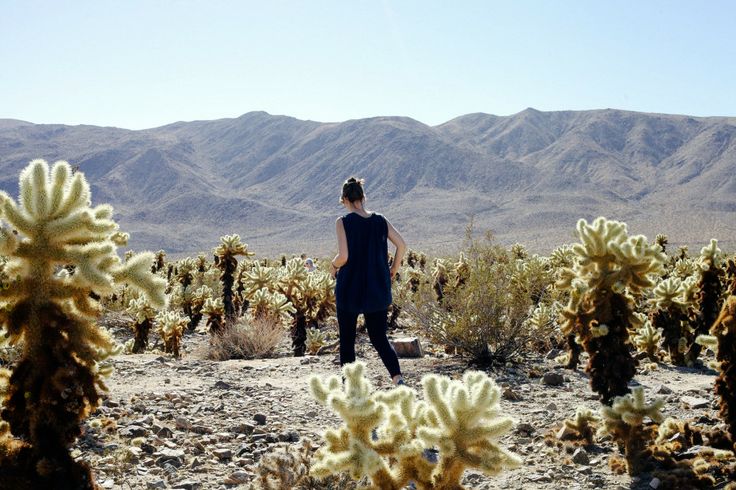 I HOLD THE KEY TO THE SEA OF POSSIBILITIES

There is a mesmerizing Patti Smith’s song I used to listen to when I was in my teens. It’s called “Land” and tells – in a very surreal way – the story of this guy called Johnny. Since the chord progression wasn’t too complicatedly, I quickly learned to play it on the guitar. There was a particular line that made me pretty excited when I sang it. It was “I hold the key to the sea of possibilities”.

When I was seventeen I had a number of small abilities, but very little how-to knowledge.
My guitar practice alone branched off into my folk Neapolitan repertoire, my intimate Carla Bruni-like songs and my love for punk rock. These three aesthetics were not conflicting to me. That was confirmed by reading on a magazine that Norah Jones also had a punk band. I thought, if she does it, why I shouldn’t? (Well, if you have ever heard me singing and playing, the answer is pretty straightforward).

Way before I would learn the position for a E chord, I was making been comic books. Since I was born, I have never stopped drawing and creating stories. As often happens, I started making comic books since I was in high school and my school mates were my first readers. Never in my life I considered to stop that. Then of course, there was the writing. I was that annoying kid asked by the teacher to stand up and read her essay out loud. I didn’t really like to do that, mostly because my pulp Tarantino-confronts-Romero-on-the-theme-of-abortion like essays were meant to be read with a little verve. Which I completely lacked of . Anyways, at eighteen I started writing for an art magazine and a number of rock and general publications. Around the same time, I started covering every blank spot I could find in the city with graffiti. Man, that was real fun!

The following year I enrolled in the art academy, and that was when they told me that doing comics was not okay, if I wanted to be in the art word. I clearly didn’t give a crap and I continued to draw comics outside school hours. In order to pass the exams though I had to present some paintings, so after the realisation that I had zero patience for oil painting, I quickly chose watercolours.
I ended up really enjoying watercolours, to the point that I started painting everyone, from my friends at the beach to my brother sleeping on the couch – it comes out he knew I was painting him and he intentionally kept on changing position, so I had to restart my painting over and over again. A part from that inconvenient, my watercolours practice led to a couple of exhibition around Italy.
Around the same time, I started a poetry group with two friends called “Poetry Experience”, which in short consisted in associating our poems with art installations.

That didn’t retain me to publish my comic books with a local publisher and keep on doing graffiti. When I finally quit street art – the main reason was the cost of the spray paint and lack of a crew – I decided to open a fashion blog with a friend. It was called “Gioco di Donne”, the Italian title for the movie “Heads in the Cloud”. The main character, played by Charlized Theron, was a woman who could never stick to one identity or job and took life light-heartedly, as if it would be just a game. I related to this character a lot, except for one crucial difference (aside the evident ones between me and Charlize). That character was crazy rich. As for the blog, my friend abandoned me the following year, and I found myself being the model, the photographer, the stylist and the writer of Gioco di Donne. On the about page of the blog I described myself as something in between a Renaissance man and circus monkey.

Envy for other people has never been an issue for me. In fact, it’s quite the opposite. My feeling when I come to know about other people’s exploits and adventures is pure excitement. It’s like after seeing a pirate movie at the cinema. I want to do that too! That’s why I tried many other creative things in addition to the ones listed above. From busking to regularly solo-dancing on my terrace, I did many of these things at once. The account of my whirling creativity branching could probably go on and on and I’m sure it will continue all my life long. I was always one for trying out all sorts of things. I always believed doing different things opens your mind, you can start see the connections between one thing and another. Everything I learned up to that moment was suggesting me that. I remember another fundamental quote, this time from the book “Forse che si forse che no” by Italian writer D’Annunzio (a pretty amazing guy himself): “I wanted everything, everything was due to my youth”. Rimbaud was saying something along the same lines.

So here’s where the problem lied for me. I was bursting at the seams with continental readings. Don’t get me wrong, I still love these authors, although now I know that to create that romanticism, they removed the practicality all the way. One thing the conventional education at the art academy taught me, is that a painting is not a photography. You can get rid of the part that are not useful or disturb the composition. “It’s not pictorial, so you don’t paint it”, the teacher used to say of the plug behind the model’s sofa.
The plug might not be in the painting, but in real life you kind of need it to turn on the lamp diffusing that soft light which gives the painting such a special feel to it.
So that was my problem. I thought I would have needed just to do the things I loved and a living out of it would have naturally followed. While I tried many different creative outlets, I wasn’t inconstant either. Everything I was doing had something to do with writing, drawing and storytelling. On top of that, through all my experimentations, I constantly kept on writing articles and draw graphic novels. I can’t imagine myself doing otherwise.
Together with my romantic and practically-devoid vision of the word, I probably had another issue. A self-esteem gland swollen as the one of a Brooklyn MC. I was on the verge of walking the streets of Rome freestyling around: “Best rapper alive!” That because, I forgot to mention, when I was listening to rap music I was entertaining the idea of start making my own lyrics. Because you know, why not?

When I was finally out of art school, I was confronted by the real word. I have to admit I have been lucky enough to have a great family who supported me in a foreign city and always pandered my artistic passions. At twenty-two, without have ever stayed in a “normal” job more than one month and a half (my five years in art writing and journalism were unpaid at that stage), I had to choose a career. Just one. I remember a pivotal conversation with my boyfriend, a guy who deeply resents romanticism and he is in love with how-to books (that’s why our relationship has been troubled since the beginning I guess). Anyways, he told me: “Look, you can’t be both a comic book artist and an arts writer. You can do both, but you have to choose just as your career. Which one are you happy to compromise?”

Mind you, compromise here doesn’t mean to became a sell-out, it simply meant “to adjust your skills to clients’ needs. “Are you open to colour someone’s else comic book, or draw a story for another writer?” Hell no! For me the drawings and the story went hand in hand and the only person who could decide how things would have been, was me and just me.
“Ok. What about reviewing an art exhibition, or even… write an article for a coffee magazine. Would you be ok with that?” Sure!
It was clear what I had to do. On top of that, as much as I like to draw comic books, sitting on a chair never was my idea of fun. I would rather go out to do interviews, review exhibitions and have a constant connection with people. I could have that by working in the arts.

We were talking of romanticism. At that point, knowing I would want to become I writer, I picked up a Simone De Beauvoir’s autobiography and I read it. It took me a while to tell the difference between inspiration and useful, practical suggestions. When I was in Australia I regularly went to bookshops and libraries getting finally accustomed to “How to” book, on all sort of subject. Creating a blog, social media marketing, writing style guides. I bought two books about freelance writing. I started to google the questions that I didn’t know – something that didn’t even crossed my mind before.
I still think being all over the places is what mostly defines me, together with my helplessly romantic continental readings of course. Those books and experiences helped me shaping my concept of beauty.
But now I’m also aware that in order to create a life for yourself and a career out of your passion, you have to pour everything you can into one single passion. Some people say you should let go of all your small talents all the way to refine just one, to the point that you can make your living out of it. That is really cruel and I don’t think I’m prepared to that. I don’t even want it. At the same time, I hate someday-thinking, so when people ask me “Are you working on a new comic book?” I really feel bad to say: “Actually I’m not drawing that much in these days because I’m concentrating on my career in writing and journalism.” “So comics are your hobby…” “To hell with hobbies!” I typically snap “I don’t have any hobby! I hate that fucking word, so don’t say it ever again!” After that people usually don’t ask for more details. If you work in a nine-to-five job maybe is easier have a side hustle. As hard as it may be, when you come home from work and in the weekend you can work on your passion (obviously I say that with such obnoxiousness because, as I mentioned earlier, I never had a real job).
You have to admit though that as a freelancer there is no such a thing as free time. You are not paid hourly, but on the base of your efforts. There is no limit to the queries you can craft and send.
I have no solution for that. Whenever I have the chance and feel like, I still blithely draw and play guitar. These are the activities that add beauty to my life. But now as an adult I know I’m primarily committed to arts writing….and related activities. What I mean with related activities? Well, If they ask you to curate an exhibition you can’t say no, right?
That’s how I learned that it’s true, we really do hold the key to the sea of possibilities. But to choose which door you want to go first, that’s where the power lies. 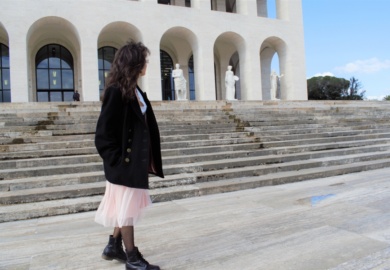 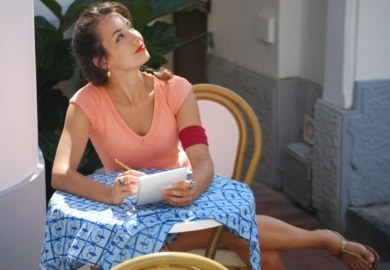 2017 END OF THE YEAR REFLECTIONS: EXPERIENCING LIFE AS AN EVEN FLOW